How Financial Dishonesty During Marriage Can Impact Your Divorce Finances

What is Financial Dishonesty?

No matter how small, financial dishonesty in a marriage is always a red flag.

Who is Financially Dishonest?

There are many reasons that a person may be financially dishonest. They may have a problem—like in the case of addiction—or they may just struggle with spending. Other factors include affairs, mental illness, and behavior patterns. There may also be other, or multiple causes for hiding spending or financial information.

Financial dishonesty and divorce are not always synonymous. In many instances, spouses can work through the dishonesty and find healthy ways to cope with the negative impacts of it.

When dividing assets, financial dishonesty may have an impact. If the spouse was spending a lot of money or if they were being dishonest about any of their assets, this could cause problems when dividing assets. If there is less available, you might not get what you had hoped for during the divorce. Additional individual bank accounts can also play a part. People who are getting divorced are obligated to report all information including any bank accounts that they have separate from the marriage so if a financially dishonest spouse has a different bank account, they will need to report that information.

Financial dishonesty and divorce in general can feel overwhelming and be hard for anyone to handle. While a divorce attorney can provide you with the help you need during your divorce in court, they may not always be able to help you with the financial aspects of your divorce. This can lead to one party not receiving the assets that they deserve after divorce.

No matter what the cause of your divorce is, you need a trustworthy and experienced financial advisor to assist you with all things related to money in your divorce. Let Wiser Divorce Solutions help you create a plan today! 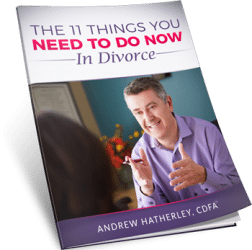 FREE eBook: 11 Things You Need To Do Now – In Divorce

Overwhelmed and not sure where to start?Stay tuned for information about upcoming Wiser Divorce Workshops.

Whether you are contemplating divorce or have already filed, you'll walk away with a clear idea of what to do next.

Sign up now to be notified about our next event.